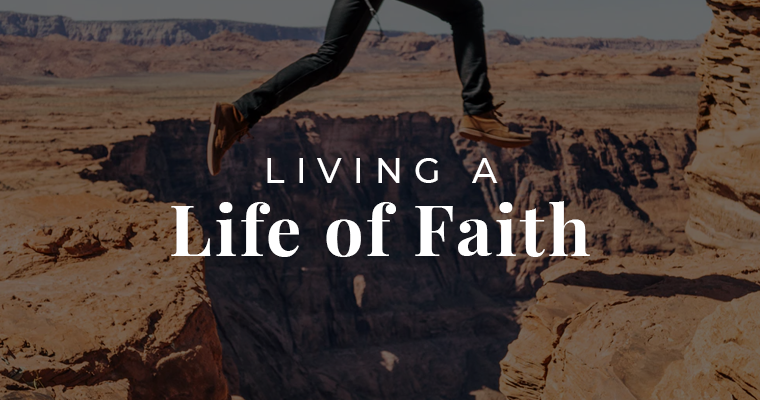 Something I’ve struggled a lot with is the concept of faith. What is faith? How is it different from belief? How do I know I have enough? It’s something I’ve prayed about a lot lately. Something I’ve been seeking the answer to.

As you can see, it’s much more than just simply believing something, it’s trusting and stepping off the edge. Faith isn’t about you or how much you have, it’s about the object you place your faith in that determines its validity. You don’t see the evidence of faith in what you do for the object, but by what it does for you.

Earlier this year I began working my way through reading the Bible totally through Genesis to Revelation. The other day I finished reading Numbers and began Deuteronomy. I’m sure at some point in your life you’ve heard the story of Moses and how he lead the Israel slaves out of Egypt and, you know, parted the Red Sea (I mean, happens every day, right? Not a big deal). But you see, Moses didn’t do it alone. It was God’s plan. God’s power. He was the one who brought salvation to these people. Moses was simply the messenger. He relayed God’s words to the people and obeyed what God told him to do.

After Israel was rescued, God made a covenant with them and promised he would give them the land of Canaan, which was overflowing with milk and honey. All they simply had to do was have faith in him and follow the laws he gave them. Simple right? Well, apparently not for Israel.

Very shortly after, in Numbers 13-14, they began to grumble and get angry and impatient with God because he wasn’t giving them what they wanted when they wanted it and how they wanted it (sound familiar to anyone else?). So they began trying to do things on their own. God tells Moses to send a group of 12 people to spy and scope out the land of Canaan for 40 days. They come back and say it’s everything God said it was. It overflowed with milk and honey, just like he said it would and they even brought back proof of its fruit. However, all but two spies (Joshua and Caleb) say that the city is too fortified, and the Canaanites are too strong. They’d never be able to fight them and win. All the people began to grumble and weep. They rebelled against God. They were angry with Moses and wishing they had never left Egypt and decide to head back.

God became so angry with them and tells Moses he’s going to send fatal illnesses among them and disinherit them, but Moses reasoned with him and God changed his mind and instead said that none of them would see the land of Canaan except for Joshua and Caleb.

Now I know it may sound harsh but, look at it from God’s point of view. He saved these people. He parted the Red Sea for them so they could get away quickly. He provided them with food and water. He’d done so much already to prove himself and they still didn’t believe that he could help them capture this land and defeat those in it. I don’t know about you, but that would hurt me. I know I’ve had times in my life where I proved myself trustworthy and dependable and still had someone doubt me. It sucks.

All of Israel believed in God. They interacted with him and knew without a doubt he existed. They even continued to work to obey and follow his laws. But none of them, except for Joshua and Caleb, had faith in him. They didn’t trust in his promises. Yet, despite all that, while they were faithless, God stayed faithful. Just as he does for us even now.

There are two verses I hear a lot of people use out of context as a way to scare people and make them feel like they are just too bad for Jesus to save them. They’re too sinful and they’re not doing enough for God to make it worth it. The first is Matthew 7:21

“Not everyone who says to me, ‘Lord, Lord,’ will enter the kingdom of heaven, but the one who does the will of my Father who is in heaven.”

“And then will I declare to them, ‘I never knew you; depart from me, you workers of lawlessness'”

I don’t know about you, but the first time I heard this verse (and several times they’re after) it struck fear into my heart. Would I be one of those people? When I died would Jesus tell me to depart from him? That he never knew me? Would I not be good enough? Would I not have done enough? Would I have sinned just one too many times?

However, let’s look at the?passage?in the context:

Notice how it changes things? Gives it a whole new meaning when you see the verses that come before or after. The will of the Father is for us to believe in the Son. To place our faith in Jesus. In what he completed on the cross. (John 6:40) If you notice, the people Jesus is talking about came to him and told him about all the good things they did for him and in his name. They added on their good works and trusted them to get them to heaven instead of Jesus. They didn’t have complete trust in what Jesus did for them and were still trying to earn their way there. They were looking at their own ability instead of God’s ability, just like the Israelites.

Christianity is more than just a simple belief that it’s true (that Jesus was a man and the Son of God who died on a cross and rose again three days later), but confidence and trust that it’s true. Trust in Jesus and his payment for all of it on the cross. Without faith, it does nothing for you. Without faith, we can’t please God. (Hebrews 11:6) Everything and anything we do have to be in faith, trust, and dependence on him. Anything not done in faith is sin (Romans 14:23b).

It’s such an easy and simple thing that we have to do. God made it so easy for us. Salvation is a gift, not a reward. It’s not something you need to work for and earn. God wants to save you. All he requires from us is to have faith in him and what he’s done for us. Jesus says we just need to have faith even as small as a mustard seed. (Matthew 17:20)

Yet we make it so complicated. I know I still struggle everyday with times where I feel like I need to make sure I’m good enough. But we have to step out in faith, in confidence, and trust in what Jesus did for us. To let go of our pride. To stop trusting our own ability or performance to get us there. There is nothing we can do for Jesus, but yet he does everything for us. It’s all about him. Not about us. About what he is doing for us. He is mighty and powerful and promises to save us.

All we need to do is have faith.

« How can you not love Jesus?
It’s all about God’s timing »