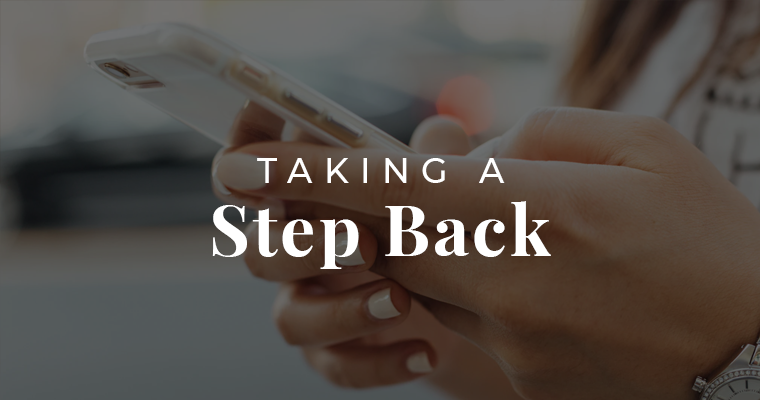 For the past several weeks I’ve been unintentionally on social media a lot less than I normally am and it’s been amazing. Ever since the pandemic started, I found myself on social media all the time because it was something to do, and because there was so much being shared about it. Since then, it’s been flooded with other things that are going on, like the elections and social issues. And it was beginning to wear on my mental health.

No matter what the “hot topic” is at the moment, you’re always going to have people who share a different view than you. It’s so easy to get worked up, especially when you feel your view is the “right” one and anyone who feels differently is “wrong”. I found myself being one of those people and it was so silly honestly. People are never going to change their views because of something some random person said on Facebook. It’s a waste of so much time and energy to argue, yet we keep doing it.

I started getting focused on other things, like reading more, playing a game, or doing random projects around the house, and realized I was on social media a lot less and that I was in a much better place mentally. And when I do go on social media, I’m now being intentional about what I’m looking at. I love going on Instagram and watching stories from bookstagrammers because it makes me excited about reading. I try to avoid anything that is political or about any of the current issues of the moment.

It’s not that those things aren’t important, it’s just not important to listen to someone’s opinion on those issues. We all seem to think because it’s our opinion, that it is the right one and that isn’t true. One of the great things about the world we live in is you can have your own opinion. It’s up to you if you want to share it. It’s up to you if you want to change it. We can give someone all the information we want, but until they are in a place they are willing to listen and are open to having their opinion change, it won’t matter.

Now that I’m not constantly allowing all the negative emotions of others into my life, I find myself generally happier. The things I think about people are more positive. I find I’m more open now to allowing my opinions and views to change since I’m not constantly bombarded without people telling me how I should think and feel. I’m developing those views on my own, not because someone told me to. I prayed a lot about where my heart was and where God wanted it to be. And I think this is how He is answering that prayer.

I’ve considered deactivating my Facebook a few times, but there are so many positive things I still enjoy seeing. I love seeing people getting engaged, married, having babies, sharing photos of their dogs, and buying their first house so I’m making it a point to focus on those, instead of the negative. I will tell you though, that it isn’t always easy and the pull is always there and I’ve had many times where I was beginning to get sucked in again. But I remind myself it’s just not worth it and I close out and go do something I enjoy.

So if you’re like me and find that your mental health isn’t the best right now, try taking a step back. Focus on something you love that brings you joy, and let yourself get caught up in it. Those issues have a time and a place, but they don’t need to consume you.

9 responses to “Taking A Step Back”