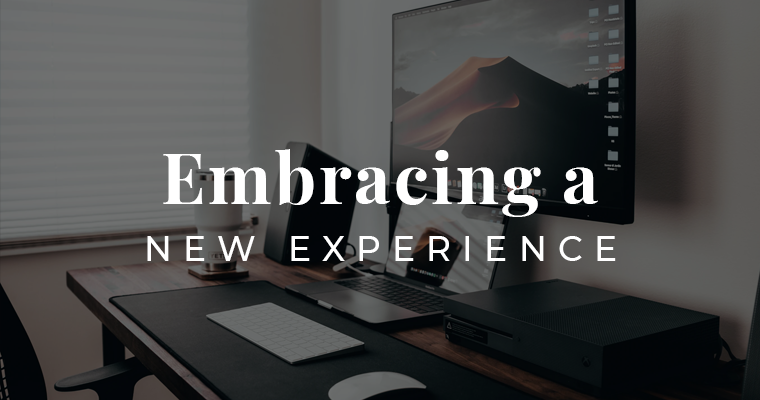 I completed my first week of work today, and while I loved it, it’s an overwhelming experience. My anxiety had been on overdrive because I’m someone who doesn’t handle change well. I have a super hard time just embracing it and adjusting to it. And I’m so afraid of screwing up or just not knowing what I’m supposed to do. It doesn’t matter that I just started – I still put so much pressure on myself.

I also have some hearing loss, so it can make it hard communicating with people and that makes my anxiety worse.

Debby, the woman whose job I’m taking over and who is training me, is so awesome and helpful. But she’s been doing it for a while, and she is excellent at it, and I know I’m not going to be as good at it as her. When I started on Tuesday, she was initially not going to be there, so I was going to be on my own. That sent my anxiety through the roof. In new situations, I’m not good at winging it what-so-ever. Thankfully, she ended up coming in so I wasn’t on my own, and she helped me to jump right into things.

It’s a lot to take in and remember, but I’m excited about it because I love that there is so much to do. She doesn’t come in on Fridays, and I was a little nervous about that because I wasn’t going to have her there to guide me through things. Thankfully, all went well, and I ended being totally find and relaxed. It was nice to get a taste of what it will be like when she leaves for good I could see what things I still need help with and can ask her Monday. When she started the job, she wrote a manual for her whole job, so I had that to help. And she also gave me her number just in case1

I am excited that I got through this first week and finally feel like I’m getting more adjusted and in the swing of things. I have had such a great experience; I already know I’m going to love it there!

It helps a lot that I know some of the people who work there already, so that makes the experience even better since I have a hard time being around a lot of new people. And the new office manager, Mark, is pretty cool too, and I think we’re going to get along well2.

The first day I started working they were still in the process of moving the office to a new space, so things were a bit crazy. The next day they had moved most everything, and we got to set up everything the way we wanted. When I first walked in, my desk was empty except for a few small tools they were using, so it took a bit to get that all set up. I still have a lot to do as far as organizing and just finding out what I need and where things should go. They still have quite a few extra things to move over, but our office is functional at least.

I surprised I’m handling it as well as I am, but the LORD, my wonderful fiance who has been encouraging me, and my awesome co-workers have helped me through this a lot. I’m so thankful for this opportunity and experience, and I know that it was all God. He had a plan, and that’s what it’s all working out and coming together.

« Tips for conquering a reading slump
Still don’t miss it »